The Impact of Foreign Investment in Indonesia’s Digital Economy 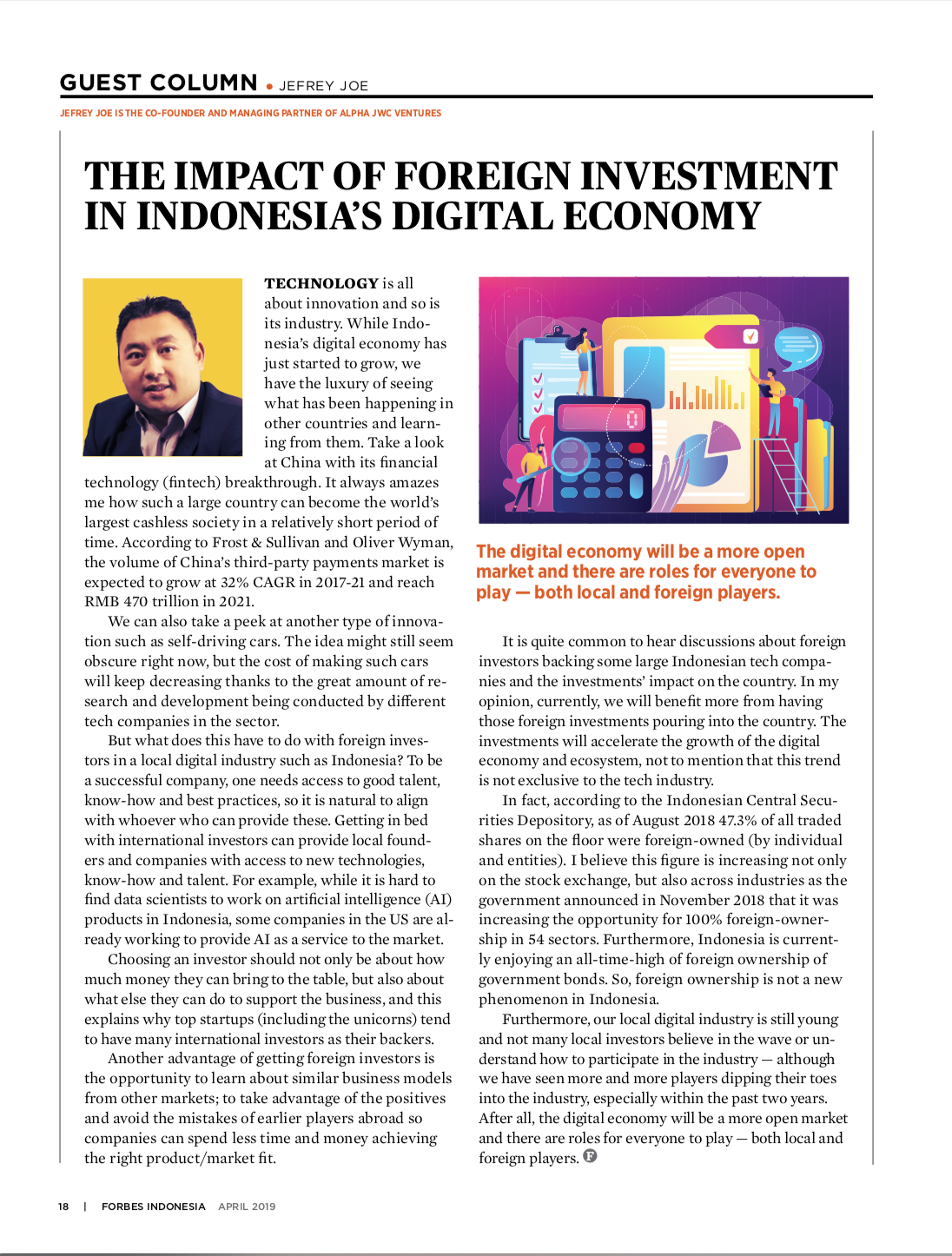 The digital economy will be a more open market and there are roles for everyone to play — both local and foreign players.

TECHNOLOGY is all about innovation and so is its industry. While Indo- nesia’s digital economy has just started to grow, we have the luxury of seeing what has been happening in other countries and learn- ing from them. Take a look at China with its financial

technology (fintech) breakthrough. It always amazes me how such a large country can become the world’s largest cashless society in a relatively short period of time. According to Frost & Sullivan and Oliver Wyman, the volume of China’s third-party payments market is expected to grow at 32% CAGR in 2017-21 and reach RMB 470 trillion in 2021.

We can also take a peek at another type of innova- tion such as self-driving cars. The idea might still seem obscure right now, but the cost of making such cars will keep decreasing thanks to the great amount of re- search and development being conducted by different tech companies in the sector.

But what does this have to do with foreign inves- tors in a local digital industry such as Indonesia? To be a successful company, one needs access to good talent, know-how and best practices, so it is natural to align with whoever who can provide these. Getting in bed with international investors can provide local found- ers and companies with access to new technologies, know-how and talent. For example, while it is hard to find data scientists to work on artificial intelligence (AI) products in Indonesia, some companies in the US are al- ready working to provide AI as a service to the market.

Choosing an investor should not only be about how much money they can bring to the table, but also about what else they can do to support the business, and this explains why top startups (including the unicorns) tend to have many international investors as their backers.

Another advantage of getting foreign investors is the opportunity to learn about similar business models from other markets; to take advantage of the positives and avoid the mistakes of earlier players abroad so companies can spend less time and money achieving the right product/market fit.

It is quite common to hear discussions about foreign investors backing some large Indonesian tech compa- nies and the investments’ impact on the country. In my opinion, currently, we will benefit more from having those foreign investments pouring into the country. The investments will accelerate the growth of the digital economy and ecosystem, not to mention that this trend is not exclusive to the tech industry.

In fact, according to the Indonesian Central Secu- rities Depository, as of August 2018 47.3% of all traded shares on the floor were foreign-owned (by individual and entities). I believe this figure is increasing not only on the stock exchange, but also across industries as the government announced in November 2018 that it was increasing the opportunity for 100% foreign-owner- ship in 54 sectors. Furthermore, Indonesia is current- ly enjoying an all-time-high of foreign ownership of government bonds. So, foreign ownership is not a new phenomenon in Indonesia.

Furthermore, our local digital industry is still young and not many local investors believe in the wave or un- derstand how to participate in the industry — although we have seen more and more players dipping their toes into the industry, especially within the past two years. After all, the digital economy will be a more open market and there are roles for everyone to play — both local and foreign players.