Can (or should) Our Local Tech Companies Go Public? 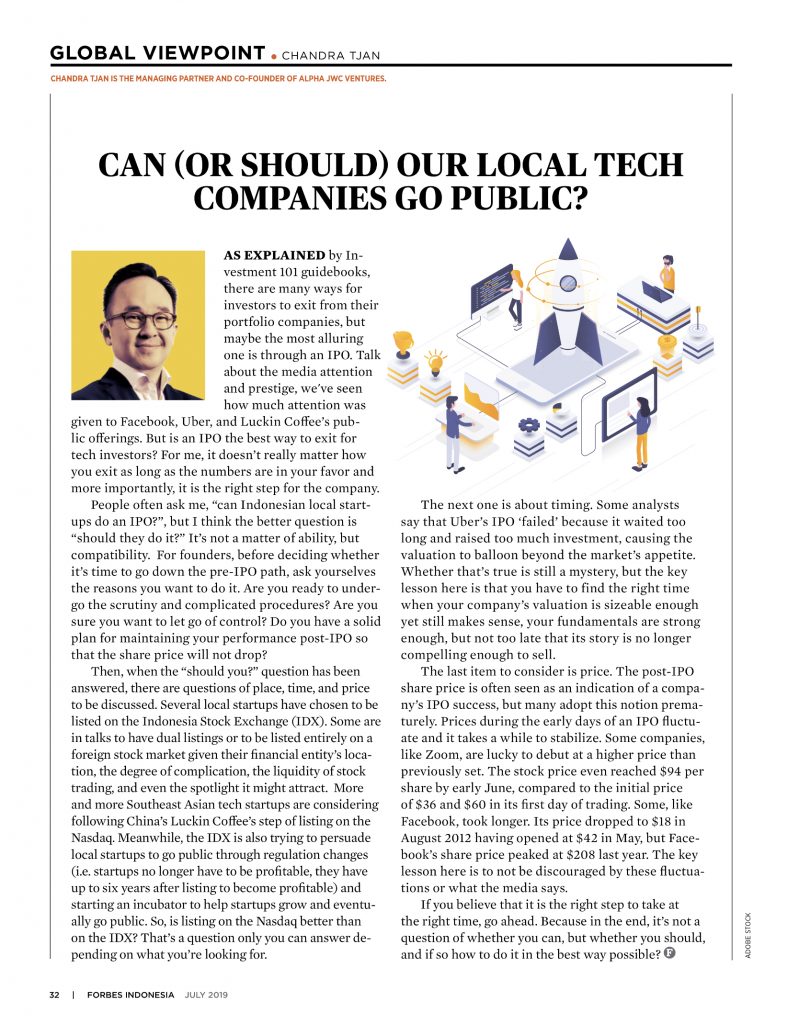 by Chandra Tjan, as published on Forbes Indonesia July 2019 edition

As explained Investment 101 guidebooks, there are many ways for investors to exit from their portfolio companies, but maybe the most alluring one is through IPO. Talk about the media attention and prestige, we’ve seen how much attention was given to Facebook, Uber, and Luckin Coffee’s public offerings.

But is IPO the best way to exit for tech investors? For me, it doesn’t really matter how you exit as long as the numbers are in your favor and more importantly, it is the right step for the company.

People often ask me, “can Indonesian local startups do IPO?”, but I think a better question should be “should they do it?”. It’s not a matter of ability, but compatibility.

For founders, before deciding whether it’s time to go on the pre-IPO path, ask yourselves the reasons you want to do it. Are you ready to undergo the scrutiny and complicated procedure? Are you sure you want to let go of control? Do you have a solid plan for maintaining your performance post-IPO so that the share price will not drop?

Then, when the “should you?” question has been answered, there are questions of place, time, and price to be discussed.

Several local startups have chosen to be listed on the Indonesia Stock Exchange (IDX). Some are in talks to have dual listings or to be listed entirely on foreign stock market given their financial entity’s location, the degree of complication, the liquidity of stock trades, and even the spotlight it might create.

More and more Southeast Asian tech startups are considering following China’s Luckin Coffee’s step of listing on the Nasdaq. Meanwhile, the IDX is also trying to persuade local startups to go public through regulation changes (i.e. startups no longer have to be profitable to list, they have up to six years after listing to become profitable) and starting an incubator to help startups grow and eventually go public. So, is listing on the Nasdaq better that on the IDX? That’s a question only you can answer depending on what you’re looking for

The next one is about timing. Some analysts say that Uber’s IPO ‘failed’ because they waited too long and raised too much investment, causing the valuation to balloon beyond the market’s appetite. Whether it’s true is still a mystery, but the key lesson here is that you have to find the right time when your company’s valuation is sizeable enough yet still makes sense, your fundamentals are strong enough, but not too late that its story is no longer compelling to sell.

The last item to consider is price. Post-IPO share price is often seen as an indication of a company’s IPO success, but many adopt this notion prematurely. Prices during the early days of IPO fluctuate and it takes a while to stabilizes. Some companies, like Zoom, are lucky to debut at a higher price than previously set. The stock price even reached US$94 per share by early June, compared to initial price of US$ 36 and US$ 60 at its first day of trading. Some, like Facebook, took longer. Its price dropped to US$18 in August 2012 having opened at US$42 in May, but Facebook’s share price peaked at US$208 last year. The key lesson here is to not be discouraged by these fluctuations or what the media says.

If you believe that it is the right step to take at the right time, go ahead. Because in the end, it’s not a question whether you can, but whether you should, and if so how to do it the best way possible?